In April this year, Better2Know were approached by MTVs Judge Geordie to help with a patient’s STI testing. We were delighted to help with our instant Chlamydia testing, so we could get their patient results in 20 minutes during the filming. We feature in the episode first shown on 8 July 2015 called STI Shock.

Better2Know has received several TV requests over the years. This year we have been pleased to help ITV’s Emergency Room with their STI Testing – where patients get their results on air, and MTV’s Judge Geordie starring Vicky Pattison. 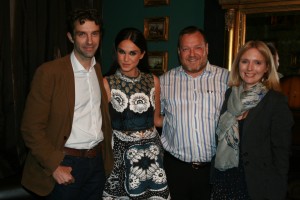 Dr Pierini and two of Better2Know’s Directors Mike Asher and Anthea Morris went to the filming in Wolverhampton in May 2015, seen in the photo above with Judge Geordie Vicky herself. In the programme we see Vicky offering party loving Marc an STI test (a Judge Geordie first). With our instant testing we were able to get Marc a result during the filming while he and the production team watched on. Marc was delighted with his negative result.

If you want instant STI testing with Better2Know then please call us on the number above.

WhatsApp Chat is available on weekdays from 8:30am to 5:30pm.