What is World AIDS Day? A history of HIV and AIDS

AIDS is one of the most destructive pandemics in history and, every year on the 1st December, World AIDS Day aims to raise awareness about this global issue. It presents the world with a chance to unite and stand up to this vicious disease. To show support for those living with HIV and AIDS and to remember those who have died, people are encouraged to wear a red ribbon in support.

In 1988, World AIDS Day became the first ever internationally recognised health day and was conceived to raise awareness about the growing AIDS pandemic that was first clinically observed in the US in 1981.

A brief history of HIV and AIDS

Where are we up to in the fight against HIV and AIDS?

This brings us up to the present day. amfAR estimates gauge that the international pandemic is affecting around 35 million people, 3.3 million of whom are under the age of fifteen. This means that, since the beginning of the outbreak back in 1981, 75 million people have contracted HIV and AIDS.

In 2013, even with the scientific and economic advances we have made worldwide, there are still 6,300 people contracting the disease every single day, which equates to around 262 people every hour. This is indicative of the fact that, despite all of the aforementioned research and good work, we are still a considerable way from solving this global problem.

Although the HIV virus is manageable through drugs and medication, there are many people in the developing world that still can’t acquire this kind of treatment. AIDS.gov have found that 97% of those living with HIV reside in low- and middle-income countries, particularly those in sub-Saharan Africa, and they simply do not have access to the requisite prevention, care or treatment. HIV and AIDS don’t just affect the individual victims though; there is a considerable knock-on effect on households, communities and national economic development. The sort of countries where this is a major problem also show a tendency to suffer from other infectious diseases and food shortages, so the issues caused by and amplified by HIV and AIDS are substantial.

However, even in these kinds of locations, the signs are not all negative. The Kaiser Family Foundation recently reported that, while Sub-Saharan Africa may be the “hardest hit region” on the planet, there are indications that the situation is gradually improving. These countries are home to 71% of people living with HIV but only 12% of the world’s population. The adult prevalence rate of HIV here is, at 4.7%, the highest in the world, but these figures are now “stabilising or even declining in many countries in the region”.

One of the main reasons that we are seeing these positive changes in recent years is due to the growing influence of ART, or antiretroviral therapy. The World Health Organisation reports that ART has had a massive impact on the pandemic as a whole and, by the end of last year, 9.7 million people were receiving it. That represents a 20% rise (1.6 million) compared to the figure recorded twelve months earlier and the overall number is projected to climb to 15 million by 2015.

The World Health Organisation, in collaboration with UNAIDS and UNICEF, has also reported on fresh guidelines that will considerably improve the availability of ART and these recent advancements, while ambitious, are exceptionally promising. The revised strategies will increase ART availability from 16.7 to 25.9 million people, which represents a monumental effort and a 55% growth. The immunological criteria for initiating antiretroviral therapy have been widened since they were last assessed in 2010 and the improvement in availability is a result of these changes. For example, there was no specific provision of ART for pregnant women with HIV in the previous guidelines but the revised ones will make it accessible to every single one. Another major change is that all children under the age of five with HIV will automatically be eligible for ART, whereas previously this was only applicable to those younger than two years old. The full table of planned changes is listed below: 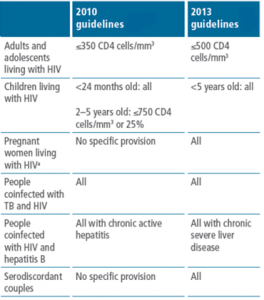 Based on these changes, the World Health Organisation, UNAIDS and UNICEF have assembled a projection of the number of people on antiretroviral therapy and the resulting number of people that will be living with HIV in the future. 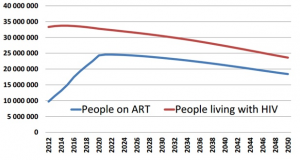 If these grand projections do indeed prove accurate, the impact of ART could be potentially game-changing in the global fight against AIDS and represents just how far we have come in the last three decades. You can view their full global treatment presentation here.

This brings us up to World AIDS Day, one of the most crucial days in the health calendar. This year is the 25th anniversary of the initial event, which was the first ever internationally recognised health day, and it remains as vital as ever.

Despite the scientific advancements and developments in the field of HIV and AIDS, many people are still unaware of the facts surrounding the pandemic and misconceptions about it remain commonplace. Discrimination and social stigma continue to be prevalent and this is something we must fight to overcome.

As a result of the fantastic work carried out by researchers and supporters, HIV is no longer considered life-threatening and it is entirely manageable for those with access to the most advanced methods of treatment. However, the threat of HIV and AIDS has not simply disappeared, as many do not have access to the kind of prevention and care required. World AIDS Day is designed to remind the global public and governments that the pandemic is still a very real challenge and that it has not simply gone away.

The main aims of the day are:

By fulfilling these objectives, we can help fund the global battle against AIDS, as well as educating more and more people about the realities of the pandemic and banishing the myths and prejudices that still surround HIV and AIDS.

What can you do for World AIDS Day?

There are many things that you can do to help support World AIDS Day and really make this year’s commemorations count. Firstly, with the influence of social media constantly growing, you might like to share a link to the World AIDS Day site on Facebook or Twitter. Changing your picture to reflect the occasion, adding a relevant hash tag or sharing a viral video related to World AIDS Day might seem insignificant, but this enterprise is based around people standing up and taking part. If everyone contributes to raise awareness, the repercussions around the world will become evident.

Another way to show your support is by wearing the World AIDS Day red ribbon. This symbol has long been representative of the fight against HIV and AIDS and is annually displayed at the White House. The tradition began in 2007, when a 28-foot red ribbon was displayed on the building’s North Portico, becoming the first symbolic banner to hang from the building since Abraham Lincoln’s time in office.

Finally, you can arrange your own form of fundraising, with some different ideas on the World AIDS Day website. For the third consecutive year, Better2Know will be supporting the Terrence Higgins Trust, making a donation for every HIV test or screen booked.

WhatsApp Chat is available on weekdays from 8:30am to 5:30pm.